Can Tick-Borne Illness Be Transmitted in Utero? 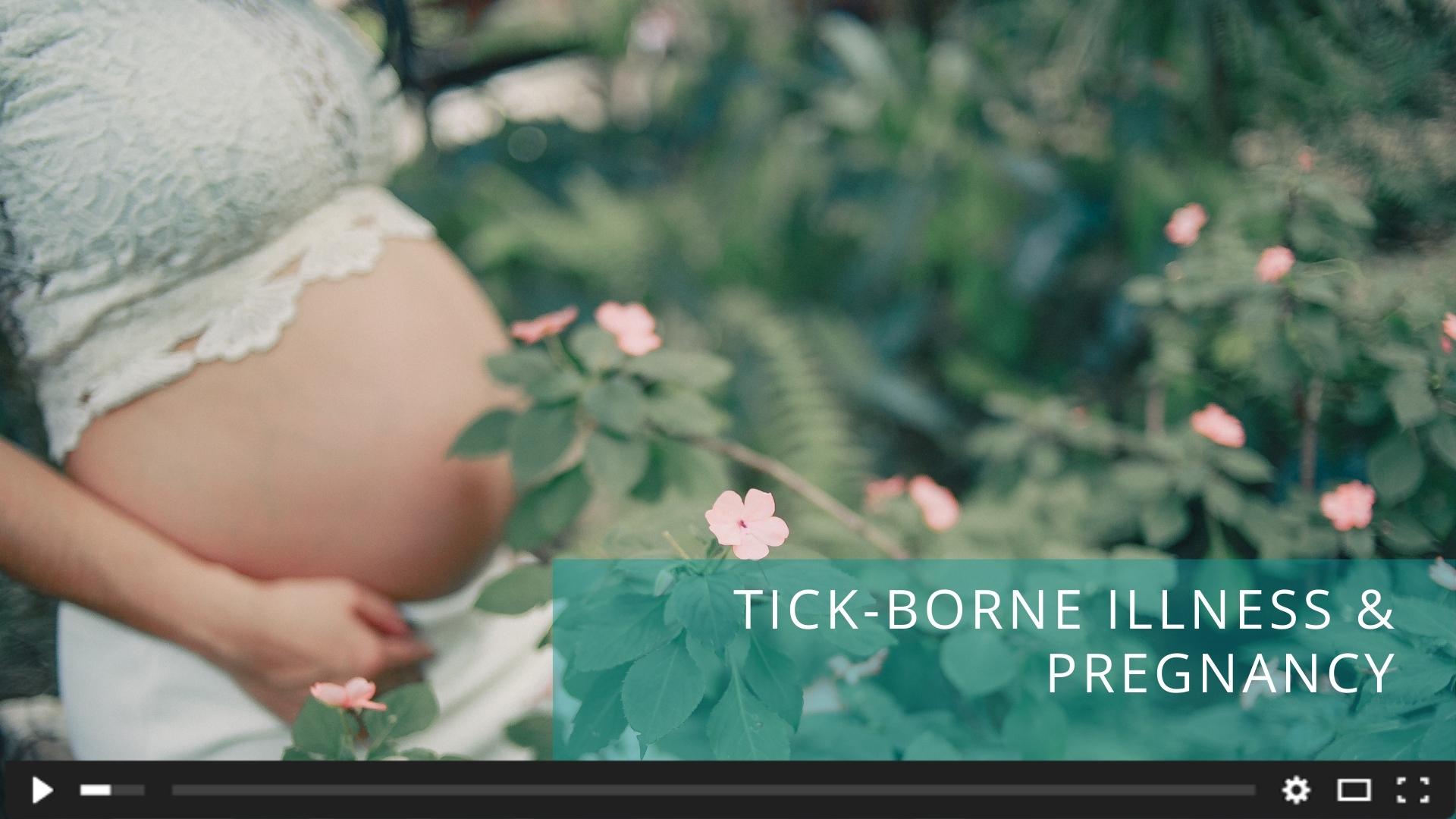 This is a case about tickborne illness being transferred in utero.

I really love the Infectolab test, because it’s really been able to see what is real clinically, in comparison to what is real via laboratory diagnosis, in a way that I haven’t been able to see before. I just have one case of this in the lab, but I think that it’s telling and I can’t wait to do more cases like this with Infectolab.

Regarding maternal transmission of tickborne illness, there’s not much research on this, right? This case does strongly suggest maternal transmission, which is why I’m very happy with this lab, Because I wouldn’t be able to have a case where I was able to demonstrate something like this with a lab.

According to the CDC, untreated Lyme disease during pregnancy can lead to infection of the placenta. But spread from mother to fetus is possible, but rare. We see this in our clinic very often. OK, so we see people, we see families where the mother or the father has the diagnosis of tickborne illness and the kids do as well. But we’re not sure, we think, we always thought that yes, it was transmitted in utero. And there’s a little bit of research that shows, but we couldn’t really prove it in the labs. So, remember this is just an N of one, so we’re not calling it proof, but I feel like it’s on the way. If I can keep showing this in the labs I’ll feel more like we can prove that.

Which is why I found this case so interesting. In this group of patients with more severe symptoms, we see a higher incidence of transmission in their offspring. But, still the CDC is just reporting on the population, on the general, the population at large. That’s not who comes to see us.

OK, so, a brief history. We’ll talk about symptomology after.

The mother, 48-year-old white female, she was bitten by a tick six or more years ago. Six to eight years ago. She has mold exposure in the house that was five years ago, and she kept, that family kept getting re-exposed to mold over five years.

There’s a daughter, she’s six, no tick bite known, but of course she had mold exposure since birth because the family kept getting mold exposure over the last five years.

And the father has too, no known tick bite, And of course mold exposure.

They come to me with a diagnosis of only mycotoxin and mold illness. A doctor had diagnosed them with that and had tried to treat them, nothing happened. They got a little better here and there. They did get keep getting re-exposed to mold, which is a reason why they didn’t improve, but there was not a diagnosis of tick-borne illness. Nobody diagnosed them with that.

So, they come to me, wanting a treatment for mycotoxins and mold, and by their symptoms I think there’s something else going on as well as the mold and mycotoxin illness. Of course, I am thinking it’s tickborne illness based on their symptoms which will get into after.

Talking about the father, so just the Infectolab diagnosis.  I don’t have the labs showing up here, all three of them because it’s just too much paper, and I want to show you this side by side. So, I’ve tried to put things together on the slides as much as possible. In his Infectolab test, there’s no tick-borne illness diagnosed. At all! None! But he does have some cytomegalovirus, interferon gamma borderline, which means he’s fighting it off. A little bit, it’s there. That’s all he has. And of course, there’s mycotoxins and severe mold IgG allergens, which are elevated. Diagnosed by another lab.

Here I’m going to talk about the mother, the daughter, and the son. There’s a lot of writing on this slide. There are some important things all on the same slide so you can compare and see the sharing of the diagnoses.

The mother, she’s got, this is all by Infectolab now, she’s got Lyme, Bartonella, Epstein-Barr virus, cytomegalovirus, all positive in interferon gamma. Meaning that she’s, the infections are active in her right now.

Next, let’s talk about the daughter. Remember she’s just six. Take a look at the infections she has in common with the Mother. No tick bite known, okay? Lyme, Bartonella, Epstein-Barr virus, cytomegalovirus. So, we see the exact same infections here. She’s got interferon gamma and interleukin two both positive. When I see that, I’m thinking, she’s in the process of getting her immune system under control, as evidenced by the interleukin two. These are from central memory T cells, which means that her body is beginning to tamp down the inflammatory response.

Now, we don’t know if this is because of a child’s strong immune system. We don’t have enough data on that. Or is it that we’re finding her right in that time between transmission and active infection resolution? I don’t know. I’d like to know, but we don’t have enough data on that. That’s a whole nother point in itself, but the main thing, the take home message here is that the mother and the daughter both have the same infections in common.  The mother has a history of a tick bite, the daughter doesn’t.

The difference I see here is that he’s got Erhlichia, and his mother and sister don’t. Perhaps they did in the past, and that’s not apparent now in their immune system with either interferon gamma and interleukin two, or maybe he did have a tick bite which transmitted Ehlichia to him. I don’t know. It’s possible that he had a tick bite that the family isn’t aware of. According to them there was no tick bite, but sometimes they happen, right?  Even when people don’t know.

So, he appears to have a lot that’s borderline, but his mother and sister are currently fighting, and like his sister it’s likely that his immune system has fought off a lot of this. But most recently, he’s been getting Bartonella. According to his labs it’s just resolving.

Let me get to the next slide here.

So that was the piece that I wanted you all to see regarding how in this test this is a clear case of the likelihood, of the suggestion of tick-borne illness being transmitted in utero. We see the same infections all around for mother to children. With some exceptions here and there. I wouldn’t have been able to see this as clearly on other labs. Because here we’re looking at the immune system, looking at the interferon gamma and the interleukin two, and what is active right now.

I want to get into the clinical picture of these patients of mine. After talking about the labs, I thought it would be interesting for you to hear about their symptomology.

The clinical picture of the mother, she’s got this pain trifecta; shooting, burning, aching pain in her, myalgia and also in the joints. Typically, this is due to Bartonella, mold, and Lyme, that combination. Sure enough, on Infectolab, the Bartonella was raging, and so was the Lyme. So, her symptomology did correlate with what I found on Infectolab here.

And, brain fog. Lyme and mold more than Bartonella would typically cause brain fog. And, you know, her Lyme was raging as well, on the Lyme.

Extreme fatigue, likely from cytomegalovirus. Her cytomegalovirus was through the roof, I forgot to mention this, and so was her daughter’s. Like through the roof. And that was another way to, sorry, that’s another infection to think about transmission familialy, obviously that does happen. I just see how their immune systems handle it in a similar way. It was very interesting.

And of course, the fatigue could be due to the mold and tick-borne illness combination. So, they’re all consistent, all her symptoms are consistent with Lyme, Bartonella, Epstein Barr virus, cytomegalovirus all being active, but now I’m able to with this lab, I’m able to tease all that out. Better than before.

So now about the daughter. Her symptoms were constipation, could be due to tick borne illness, mold, mycotoxins, cytomegalovirus. They are new patients to me, so we’re also doing a GI panel. Could be due to parasites or other infections in the gut.

The puritis, likely due to Mast Cell Activation Syndrome or mold.

OK, so on to the son. He had fits of rage as his primary, primary symptom. In fact, there’s no pain, there’s no fatigue, it’s all rage, and that is consistent with Bartonella. His Bartonella is now interleukin two positive, and that suggests that he’s resolving this infection. The interesting piece is that before he came to me, he was having fits of rage about 7-8 times a day, and now they’re three times a day. So that would make sense that the parents were telling me that when he was having fits 7-8 times a day, several months ago, it’s very different to now, with the fits three times a day. If you think several months ago, likely, his interferon gamma was positive, and now that he’s got interleukin two, it’s likely that his fits of rage are decreased because of that, because there is some healing happening, there’s some resolution of this infection happening.

But really, really important to note is that the behavior pattern was likely established by the Bartonella, so it’s a classic Bartonella mental piece. However, when a neurological or mental or physiological piece is established by any infection, and that infection resolves, the body knows that pattern, and another infection or toxin can come in and carry on that pattern. So, very similar to what Dr. Gordon was saying with his case, that the tick-borne infection was resolved, but there’s a pattern there that still will be carried. Do we continue on with antibiotic therapy, or any therapy to resolve the infection, or do we work on regenerative medicine? Pieces to modulate the damage that had been done by the infections or the toxic things we’re talking about.

So, thank you guys! That’s my piece and it’s some, seems pretty clear to me in this lab that there was transmission from mother to children in utero, because she did get that tick bite before she had her children, and apparently her children did not have tick bites.

Find out if working with Gordon Medical is right for you. Set up a complimentary discovery call with our new patient coordinator.

Nebulized Glutathione for Smoke Inhalation Fires seem to be a part of living in CA now. Many people are finding that the smoke has caused